Garbage from a mansion


I think of FB as a necessary evil these days. It's good to connect with friends and family. Recently I checked in frequently for updates from a friend regarding her husband who was undergoing an operation. Requests for prayers are usually responded to immediately.

FB has also been reminding me of my 'memories' from years ago. Today, as a I write, with real snowflakes falling, I was reminded of this, from six years ago:

Crisis management last night. Son distraught that Art teacher told him his (most unusual) perspective for an assignment was not acceptable. Took a long time for him to come to a point to say, "Yes, I am garbage, but I am garbage from a mansion," which became "garbage from a palace" before he went to bed. He's been bottling up about this new Art teacher for some time, clearly.

What were you doing this day six years ago?

I now know that I had to try to defuse what was a very exasperating situation for my then ten-year-old. He was probably in a flood of tears as he tried to come to terms with the demands that his Art teacher had of him.

I have recently seen a young girl, four years of age, colour so beautifully 'within the line'. My son was not able to do that till he was much older. Maybe he still does not bother to do that.

For a ten-year-old to conclude that he was 'garbage' as a result of what a teacher said is not a great experience. Eventually I was able to salvage the situation by convincing him that at least he was good-quality garbage.

Not because we live in a mansion, or a palace, but that God loves him for what he is, garbage or no garbage.

As for the Art teacher, she knew how intellectually advanced my son was. I think she wished that son would put in more effort into her class.

What she did not realize was that son was not very good with two-dimensional art. Give him a piece of paper, however, and he could turn it into origami if he so wished. He is that type of person who could look at a 3-D object and then comes up with an origami version of it. IF he so wished.

Some years ago the youth pastor at church challenged him to come up with something for the mums on Mothering Sunday. He gave it some thought and then set about making origami flowers which he had designed. When he realized that he could not do large quantities of this all by himself, he taught us (mum and dad) to do the basic folds. We then let him do the complicated bits. 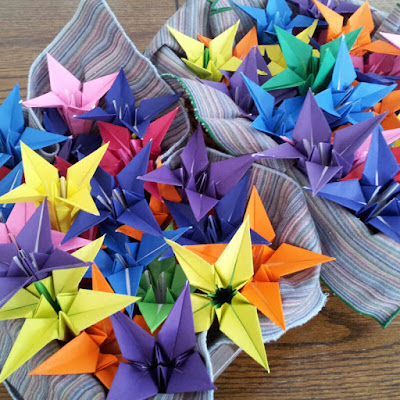 Over the long Christmas break he came up with the idea of turning origami into jewellery. (Something to do with the 'enterprise' group he is involved with at school.) And so he experimented, miniaturising his origami as much as possible. Sadly he was not the first person to think of that. But the fact that he did gave me great satisfaction.

Not all children would turn out to be the way parents and teachers wish them to be. I would love mine to be a rugby player, to play for England (or Singapore, or even China, as his grandfather was born in China), but I have long since given up this dream. No, he is not ever going to be my Jonny Wilkinson.

Something he said last year took me by surprise. It is a sign of his coming to terms with himself. He had finally become more 'self-aware'. And praise God for that!

He lives with other boarders who are all intellectually very advanced. He observed that all his fellow scholars have one quirk or another. They are all 'odd' in some way. All had major shortcomings or fixations of some sort.

"Yes, mum. To some extent, we are all autistic."

Snowflakes and tattoos: a correlation?

It was a facepalm moment for me when I learned that several young people in my previous church were getting tattoos as soon as they turned 18.

As an anthropologist, I am familiar with scarification – and circumcision – as being a mark of adulthood in a ‘rite of passage’. Pain and the ability to endure pain is integral to the demonstration that one is grown-up.

In researching older Chinese people who had immigrated to Britain, I often asked them for stories on their ‘eating bitter’. Almost always, my respondents simply raised both their hands.

“Look,” they said, “what hard work has done to my hands,” as they showed me their calloused fingers and gnarled hands, riddled with painful rheumatoid arthritis. They looked just like the hands of my late parents (neither of whom had a tattoo).

My generation faced hardships of a different kind: leaving school because there was not enough money to educate the girls; if at school, walking long distances to school to save on bus fares; if we got on a crowded bus, being molested as old men and young men alike pressed themselves against us and we did not know how to respond.

Turning 16 meant finding part-time jobs and/or giving private tuition to children in the neighbourhood. I started writing for Fanfare at 16 (while working on my ‘A’ Levels) to earn pocket money. (Thank you, Sylvia Toh and Pauline Loh, wherever you are.)

We did not have ‘rites of passage’. ‘Prom Nights’ were a rarity. We were simply expected to work to contribute to keeping the family housed and fed.

Boys went through National Service where even getting to and from camp every weekend was a hardship. Precisely because these men understood, their sons were chauffeured to and from camps, or given taxi money.

So you see, we did not need tattoos to show we have endured pain and therefore ‘grown-up’.

Pain was written in our hearts, our failures, our indignity, our sleepless nights, our worries about money, our memories ... by the time we were in our late teens.

Pain was in our empty stomachs and in our envy of wealthier university friends who went off on Europe tours while we worked during the long university breaks to afford university fees and textbooks.

Of course, I may be wrong. Tattoos may not be about pain. What then are they about? Vanity? The mindless worship of celebrity cultures? Pray, tell.

LSP
Daughter of butcher and 'housewife' in Singapore. A social anthropologist by training (NUS, then London-SOAS). A reluctant migrant in UK, married to English husband whose "mistress" is the City of London. Now a full-time mother who also runs an online eco-business.